Like the Cubs and Sox, Forest Park Bank (FPB) had its regular season interrupted by COVID-19, but manager of the FPB team (aka President) Dan Watts told the Review last Friday that the bank’s “season” will reopen to the public on June 22, with acknowledgement that the virus still prevents them from using the word “regular” to describe the reopening.

The lobby of the bank at 7348 Madison St. will be open next Monday with the following modifications:

“We’re going to limit the number of people in the lobby at any given time,” Watts explained. “We’ll require masks and have hand sanitizers available. We are also setting up a system where customers will have to take off their masks for a minute and look at a camera, so we can identify them.”

In addition to looking forward to this community bank moving back toward normal, Watts was excited about his team becoming more competitive with the addition of four new staff members, all of whom were employed by Community Bank in Oak Park-River Forest who decided to leave that institution when it was bought out by the larger Byline Bank, headquarters on North LaSalle St. in Chicago.

Claude L’Heureux joins the bank as vice president of Residential Mortgage Lending. According to FPB’s latest Bank Buzz publication, L’Heureux has 40 years of experience in this area, starting with the former River Forest State Bank when it was a community bank and then bought out by Corus Bank. He then moved over to Community Bank where he was a mortgage lender from 1996 to 2019.

Mary Ellen Hanrahan was the senior loan processor at Community Bank and will continue doing that work as a loan processing officer at FPB.

Both will continue working with the single-family mortgage business and will be joining Judy Graves and Sandy Wasiliauskis in that department. Watts said they will enhance his team because they bring with them not only experience but, in addition to living in this area, they bring many contacts within the neighborhoods.

“It was a good time for these guys to come on board,” he explained, “because the single-family mortgage busines is a good area to be in right now. With interest rates at historic lows, many homeowners are thinking about refinancing or home equity loans.”

An unintended consequence of the shutdown, he speculated, is that people sitting at home have time to think about their finances and realize they have an opportunity in the midst of a difficult situation. There is a multiplier effect at his bank, he added, that often accompanies that sort of loan. Especially with new customers, once they establish a relationship with people at the bank, they will often return down the line for products such as car loans.

Watts also explained why veterans like L’Heureux and Hanrahan would choose to move over to another community bank.

It’s a matter of “fit.” When banks scale up and get bigger, he said, that environment becomes less attractive to some people.

“Personally,” he said, “I like the ability to do multiple tasks like dealing with the media, with consumer issues, regulators, safety and now reopening. I do have my fingers in many things.”

He added that small community banks can have a certain character and fill a niche that bigger banks have a harder time with. When large banks buy up smaller ones, a lot of overhead can be eliminated with an economy of scale, which affects profits, but bigger banks often lose “touch points” with their customers, leading to what Watts referred to as “missteps.” When a customer makes bad financial decisions and needs a loan, approval of that loan may be made by an officer in another city like New York where all that officer has is a sheet of numbers.

In a community bank, he continued, staff has a chance to know people and not just their numbers. When the numbers are not what they should be, the relationship with the customer and knowing their character allows a better judgment on whether they’re worth taking a risk on.

In addition, community banks can be the focal point of the business community in a smaller town like Forest Park. When a big bank buys out a smaller one, the impact of the latter on the community often diminishes. In Forest Park, two of FPB’s vice presidents are on the board of directors of the Chamber of Commerce here, the bank provides office space for the chamber’s director, and it provides financial support for community events and nonprofits.

It’s also much like what has motivated many small business owners in town to leave high-powered positions in the corporate world and choose to run their own store or restaurant.

Two other “free agents” who have joined the FPB team are Janel Morales who is now a vice president in retail banking and Maria Munguia an operations officer.

Byline Bancorp has agreed to acquire Oak Park River Forest Bankshares in a deal valued at around $42m. 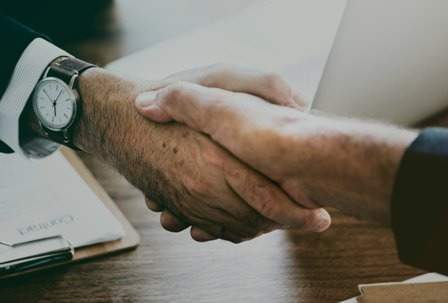 Community Bank operates in three locations in Oak Park and River Forest, and is claimed to be the only community bank operating in these markets. Community Bank’s deposit base consisted of 93% core deposits, as of 30 June this year.

Oak Park River Forest president and CEO Walter Healy said: “Byline shares our commitment to serving our communities and being a trusted partner that helps our customers reach their financial goals.”

As per terms of the deal, each outstanding share of Oak Park River Forest’s common stock will be converted into the right to receive 7.93 shares of Byline common stock and $33.38 in cash at the closing of the deal.

Subject to regulatory approvals, the deal is expected to be completed by the second quarter of 2019.

Byline Bancorp president and CEO Alberto Paracchini said: “Community Bank of Oak Park River Forest has built an outstanding reputation for exceptional service and relationship banking at its finest, and we believe it will be an excellent complement to our existing franchise.

“We look forward to welcoming Oak Park River Forest customers and employees to the Byline family. We believe the combination of Byline and Oak Park River Forest will enhance the customer banking experience by offering greater convenience while still providing the same commitment to superior customer service.”

Based in Chicago, Byline Bancorp is the parent firm of Byline Bank, which is a full-service commercial bank that provides services to small and medium-sized businesses, financial sponsors, and consumers.

The Board of Directors of Community Bank of Oak Park River Forest today named Walter Healy, 42, president, succeeding Martin J. Noll, 65, who was named chairman of the board and continues as chief executive officer.

Healy, who has been with the Bank since its founding in 1996, had been executive vice president.  Noll succeeds Henry B. Pearsall who has elected to step down as chairman and will be named chairman emeritus.

"Community Bank was founded on the philosophy of being a locally-owned and managed financial services organization and we are pleased that the Board's succession plan has recognized Walter, who grew up in Oak Park, was a founding member of the Bank and has been instrumental in our overall growth and success.  I look forward to continuing to work with him and our entire team to serve the residents and businesses of the greater Oak Park, River Forest and Forest Park communities," said Martin J. Noll, chairman and ceo. "We also want to thank Hank Pearsall for his great leadership as chairman these past 12 years and are extremely grateful that he will continue to provide his advice and council as a member of our Board" Noll said.

Healy began his banking career in 1988 with the Oak Park office of The First National Bank of Chicago, (now JP Morgan Chase) as a commercial lender.  He was subsequently elected a vice president.  In 1994, he joined Firstar Bank (now US Bank) in Oak Park as vice president of commercial lending, the position he held prior to becoming a founding member of Community Bank in 1996.  A finance graduate of the University of Notre Dame, Healy is also a graduate of the Graduate School of Banking, University of Colorado, Boulder.  A lifelong resident of Oak Park, he and his wife and five children reside in south Oak Park.  Active in civic and charitable affairs, Healy currently serves on the finance committee of Ascension parish.

Noll is a founding shareholder of Community Bank and a 40-year veteran in banking, having begun his banking career in 1965 with American National Bank and Trust Company Chicago (now JP Morgan Chase).  He has served as president and chief executive officer of Avenue Bank of Oak Park, (now US Bank); division president, Oak Park division, and vice president of The First National Bank of Chicago (now JP Morgan Chase) and prior to that, was president and chairman of First Chicago Bank of Oak Park (formerly the Oak Park Trust and Savings Bank). Noll is involved in several business, banking industry and civic enterprises.  He is chairman of the Oak Park Development Corporation, a community organization founded for the economic development of Oak Park.  He serves as president of the Board of West Suburban Sentinel Corporation and is a member of Resurrection Health Care Foundation. Noll is a member of the board of trustees and chair of the trusteeship committee of Dominican University and is a founding member, treasurer and a board member of the Business and Civic Council of Oak Park, a civic organization that promotes the business interests of Oak Park.  He also is a board member of the Bankers Club of Chicago.  Noll received his BA in Philosophy from Catholic University, Washington, D.C., and did his graduate studies in economics at Indiana University, Bloomington.  He also is a graduate of the Graduate School of Banking, University of Wisconsin, Madison.  He and his wife Mary Lou, reside in Oak Park and have two daughters.

Bank based in Chicago

Byline Bank is a bank headquartered in Chicago. It is the primary subsidiary of Byline Bancorp, Inc., a bank holding company. As of December 31, 2019, it operated 57 branches, 56 of which were in the Chicago metropolitan area. It is the 4th largest Small Business Administration lender.[1]

The company was founded in 1978 by the Fasseas family as Metropolitan Bank Group after the purchase of North Community Bank.[2]

The family grew the bank from a single location to more than 90 branches in the Chicago metropolitan area before suffering in the financial crisis of 2007-08.[3]

In 2013, BXM Holdings LLC, led by Roberto Herencia, purchased and recapitalized the bank with a $207 million investment.[3]

In 2015, the company was renamed Byline Bancorp Inc. and consolidated all its subsidiaries under the name Byline Bank.[6]

What is your departure address?