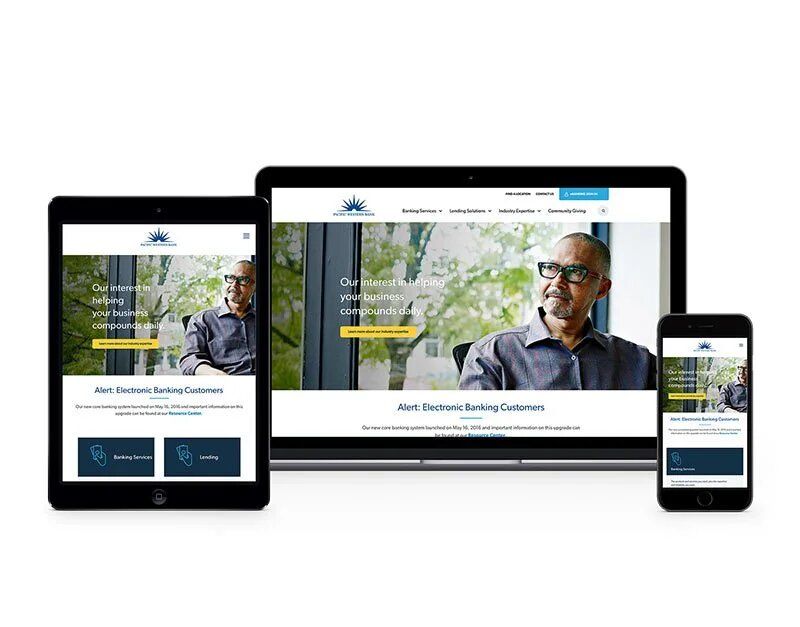 CoStar, the world leader in commercial real estate information, has the most comprehensive database of real estate data throughout the US, Canada. Pacific Western Bank appoints Steven Schwimmer to a newly created role as Chief and their venture capital and private equity investors. DH Capital, LLC served as exclusive financial advisor to Evolve IP in CapitalSource is a division of Pacific Western Bank, a Los Angeles-based.

Under the terms of the Purchase and Assumption Agreement, the Bank acquired certain assets and assumed certain liabilities related to Union Bank's HOA Services Division for cash consideration of approximately $255 million, which represents the aggregate of a 5.9% deposit premium and the net book value of certain acquired assets and assumed liabilities. At closing, there were approximately $4.1 billion of deposits related to Union Bank's HOA Services Division and approximately $6.4 million in related loans. As of June 30, 2021, on a pro forma consolidated basis, the combined company would have had approximately $39 billion in total assets.

"We are very pleased to complete this acquisition, which significantly enhances our position catering to the specialized banking needs of community management companies and the HOA clients they serve," said Matt Wagner, PacWest's President and CEO. "The HOA business unit's high-quality, low-cost deposits will further diversify the Bank's existing core deposits and provide an additional attractive funding source in a rising rate environment."

PacWest Bancorp ("PacWest") is a bank holding company with over $34 billion in assets headquartered in Los Angeles, California, with an executive office in Denver, Colorado, with one wholly-owned banking subsidiary, Pacific Western Bank (the "Bank"). The Bank has 69 full-service branches located in California, one branch located in Durham, North Carolina, and one branch located in Denver, Colorado. The Bank provides community banking products including lending and comprehensive deposit and treasury management services to small and medium-sized businesses conducted primarily through our California-based branch offices and Denver, Colorado branch office. The Bank offers national lending products including asset-based, equipment, and real estate loans and treasury management services to established middle-market businesses on a national basis. The Bank also offers venture banking products including a comprehensive suite of financial services focused on entrepreneurial and venture-backed businesses and their venture capital and private equity investors, with offices located in key innovative hubs across the United States. The Bank also offers financing of non-owner-occupied investor properties through Civic Financial Services a wholly-owned subsidiary. For more information about PacWest Bancorp or Pacific Western Bank, visit www.pacwest.com.

Commercial Observer:What’s the significance of the name change?

Patrick Crandall: Pacific Western Bank [PWB] acquired CapitalSource Bank in 2014 but chose to keep the CapitalSource brand in place because the firm was well-recognized as a national lender. Earlier this year, management decided to unify all of the brands under the Pacific Western Bank name. There was no change to the business model, people, processes, or even our loan documents.

We’re on the tail end of the current economic cycle, with lots of uncertainty regarding how long this will last, and whether we’ll fall into a recession when it’s over. How is this uncertainty affecting how Pacific Western does business?

We’ve been closely monitoring the markets we invest in to watch for signs of softening. We’re underwriting prudently and maintaining discipline in terms of loan-to-cost, loan-to-value and the strength of our covenants. We have to make sure we have all of the structural protections we think make sense for the various risk factors in a particular deal. In addition, we are avoiding lending on certain asset classes, such as land or condominium inventory loans. But we’re being thoughtful and data-driven in our approach, meaning that we’re not simply looking at the headlines regarding a particular market or asset class, but drilling down into the particular sub-market and analyzing the unique attributes of each opportunity.

For the person on the ground — developers, investors, et cetera — how should they consider our place in the cycle when assessing potential projects and investments?

One of our primary areas of focus, whether on an acquisition for repositioning or a ground-up development, is the sponsor’s basis. Late in the cycle, people tend to talk themselves into paying higher prices on the assumption that rents will continue to increase, or because the previous owner of an existing asset didn’t have the expertise or vision to unlock value. This may be true, but we don’t necessarily assume the market will continue to perform as it has, and the deal, at least for us, needs to pencil on today’s rents, or, in some cases, a discount to today’s rents. But again, each deal is a custom suit, so we look at the unique attributes of each investment in light of the market conditions within which it competes or will compete when it is completed.

How do you see the next phase of this cycle affecting construction financing in general?

We keep expecting the construction loan pipeline to slow down, and it has somewhat, but the deal volume continues to be robust. Even though we are very late in the cycle, there seems to be more capital coming into the construction space, not less. This is likely due to the low, and declining, interest rate environment, and the tsunami of capital flooding the market for all assets, looking for yield. More lenders competing for the same number of deals means downward pressure on pricing, and in some cases that pricing is blowing through what we think should be an acceptable yield for the risk.

What are the greatest potential risks for those in construction financing, given the lateness of the cycle?

There are obviously a number of risks, but I think one major risk is lenders getting into construction lending to achieve higher yields, but not having the depth of experience in order to really understand and underwrite the risks. This includes both on the front end, when originating the loan, and also during the administration of the loan as draws are being funded. We saw many banks taken over in the last two cycles because they got in way over their skis on construction loans. In fairness, lenders were generally much higher in the capital stack in prior cycles than we are now, but the importance of really understanding how to properly underwrite and administer a construction loan can’t be overstated.

How does the upcoming extended period of low interest rates factor into all this, and when assessing new projects, how should borrowers and lenders consider this information given the lateness of the cycle?

There’s approximately $16 trillion of negative-yielding debt around the world, and the global economic headwinds caused, at least in part by the U.S.-China trade war, are only making matters worse. The Fed is clearly signaling continued rate decreases, and this, combined with global capital flooding to the safety of the U.S., creates further downward pressure on rates. So, the market is expecting an extended period of low rates, which could help extend the cycle a little further even if the fundamentals aren’t quite as strong in some markets. It seems some sponsors are trying to time the market and hope that rates will come down enough to offset their higher construction or land costs (or both), but that’s a dangerous game.

What are some of the nuances of compiling a construction budget that developers should keep in mind regarding all this?

We think developers should add cushion into their construction and ramp-up schedules. As the economy starts to cool, apartments and commercial space will lease at a slower pace, and perhaps even at lower rents. We are generally underwriting a cushion in these areas and I expect we will want to increase the amount of cushion as we get deeper into the cycle.

Brad Donaldson is the Chief Financial Officer for the Commercial Real Estate (CRE) Lending Business at Amherst Capital Management.  In this role, Brad is responsible for overseeing the accounting and finance platform as well as leading the underwriting of all new originations and managing the closing and diligence process.

Prior to joining Amherst Capital, Brad was a SVP, Originations at CapitalSource, a Division of Pacific Western Bank.  In this role he was responsible for underwriting and managing the closing process for middle market real estate bridge loans.  Brad joined CapitalSource in 2002 in the Commercial Real Estate Portfolio Management group and he was responsible for managing this group from 2006 – 2013.

Prior to joining CapitalSource, Brad was part of the Treasury and Accounting group at Mills Corporation, a regional mall REIT.  Brad began his career with local accounting firms focused on serving real estate developers.

Brad holds an MBA from the University of Virginia’s Darden School of Business, and a BS in accounting from Radford University.

CapitalSource is a commercial lender that is a division of Pacific Western Bank and provides senior debtloans of $5 million to $100 million to middle-market companies throughout the United States. The company targets specific industries in its portfolio of holdings, particularly focusing on technology, real estate, healthcare, security, small business, golf finance, and equipment leasing companies. With $16 billion in assets and 80 full-service branches located throughout the state of California. Pacific Western Bank is a wholly owned subsidiary of PacWest Bancorp[1]

CapitalSource is often referred to as an on-balance sheet lender because its loans are originated, underwritten and managed internally. The majority of its loans are in three categories: first mortgage, cash-flow, and asset-based loans.

CapitalSource was founded in 2000 by future Congressman John Delaney (D-MD) and Jason Fish with an initial capitalization of more than $500 million, which at the time was the largest private capitalization for a finance company.[2]

In 2009, CapitalSource completed its revocation of REIT status.[3] Today the company operates as a C-Corp, as it did prior to 2006.

CapitalSource was briefly involved in a controversial hotel project which also involved rapper Jay-Z and developer Andre Balazs, but CapitalSource stepped out of the project when they sold the property note to another developer at a loss.[4]

CapitalSource Bank was involved in another newsworthy property issue in 2010 when they foreclosed upon a high-end Manhattan project under development. The ‘’’Manhattan Blue’’’ condominium building had initial interest from Leonardo DiCaprio, but the developers failed to sell enough units to make payments to CapitalSource.[5]

In early 2012, CapitalSource moved its headquarters to Los Angeles.[6]

In 2013, the Washington Post identified CapitalSource as a major lender to Aeon Financial, a secretive company that aggressively purchases tax liens and charges homeowners "excessive," "unreasonable," and "extraordinarily high" in order to avoid foreclosure.[7]

CapitalSource was acquired by PacWest Bancorp in July 2013 for around $2.29 billion.[8] The merger received final regulatory approval on April 1, 2014. In the agreement, CapitalSource, trading as CSE, ceased to trade at market close on April 7, 2014. Existing CapitalSource shareholders received a combination of cash and a fixed exchange ratio of PACW shares.

CapitalSource Bank played a central role in the founding of the Elder Financial Protection Network (EFPN), and the California State Legislature presented CapitalSource Bank with a Certificate of Recognition for helping to launch and maintain it.[10] Gary Dunn, Capital Source Bank’s VP CRA, is a member of the Board of Directors for EFPN, serving as Treasurer.[11] CapitalSource Bank was awarded a Bank Enterprise Award from the Community Development Financial Institutions Fund by the U.S. Treasury Department for its investment in low-income and economically distressed communities in California in 2010.[12][13]